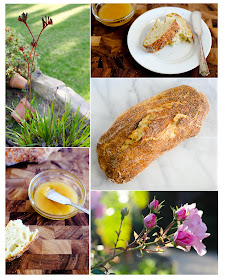 Finishing one's dissertation isn't the most carefree of times, that's for sure.  But to let you in on something, I think my German work ethic, or my deeply ingrained stick-to-it-iveness, or whatever it is, has been playing out a little too strongly for my own good.  In the weeks that I've been plugging away at work so intensely, life just hasn't felt complete.  When I pulled out my camera a couple days ago for the first time in weeks, it hit me.  The cooking, the capturing of beauty, the chronicling and sharing with you--all of these are the vital things that I've been missing so much.  As I shot these pictures, I realized that, even in busy times like these, even in times of major life transition, it is important to stay engaged with the all the joys of life.  It's what makes the busyness worthwhile.  It's what feeds our soul and strengthens us to press on.  It's what reminds us of who we are, even when circumstances around us are changing. 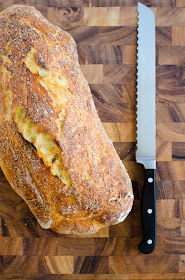 The other day, I had a break in my experiments and was able to come home on the early side.  Besides wanting to get out of the house to enjoy the all-too-rare a treat of being outdoors during daylight hours, I knew for certain that I was going to take advantage of this afternoon home by starting up a batch of no-knead bread for breakfast the next morning.  I'd made it once before, with absolutely fantastic results, and I had been waiting for the next opportunity to make it again.  It's hard to beat hot, fresh-baked bread in the morning!  Maybe it's all those childhood memories of waking up to the smell of bread in my grandfather's bakery, or maybe there's just something inherently happy about a piping-hot loaf of bread. 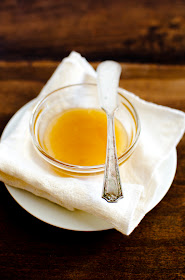 What draws me to this bread so much is its crunchy, crackling crust on the outside and the soft, fluffy crumb on the inside.  It reminds me of a good ciabatta bread, and I love eating it still warm from the oven.  Smeared with some soft honey and with a cup of tea alongside, it made for a wonderful breakfast. 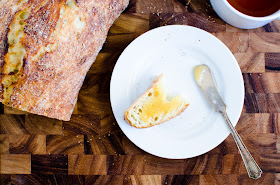 But it gets even better.  Friends, the method is SO incredibly easy--the active work involves only about a minute of mixing, a couple minutes to put the dough in the oven, and then a minute or two to cut the gorgeous, crusty loaf and munch it down.  You just need to figure out when you want eat fresh-baked bread and then start the dough 15-19 hours ahead of that.  I was curious when I first heard of no-knead bread--I'd never made a yeast bread without kneading it--and fresh, homemade bread with this degree of effortlessness seemed almost too good to be true.  But this disarming video convinced me to give it a go, and truly, no deception here, this bread is easy to make and oh-so-good!  One thing I would note is that having an enclosed baking environment at the beginning is key; covering the bread and subsequently trapping the emitted steam essentially simulates the effects of a professional steam-injection oven, producing a nice, springy bread and a fantastic, crunchy crust. 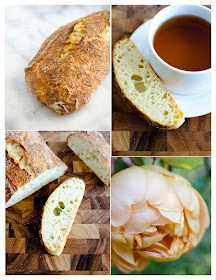 My sister has gotten into the habit of making most things from scratch, be it sauerkraut, yogurt, or bread, but with a little three year-old running around, time is always an issue for her.  Given how streamlined this recipe is, I knew she'd love it, and it's now a go-to recipe in her weekly bread-baking schedule.  If you don't have an oven-proof, lidded pot, you might like my sister's modification to the baking process: she's been using a pre-heated pizza stone with a foil dome to cover the bread during the first half hour of baking.

Place the flour, yeast, and salt in a large bowl and mix a few seconds until thoroughly combined.  Add water and stir a few seconds, pulling the ingredients together until you form a dough.  Cover the bowl with plastic wrap and let sit at room temperature 15-19 hours.

After dough has risen, and before moving on to the next step, place a heavy, oven-proof, lidded pot into the oven and pre-heat your oven to 500 F.  Turn dough out onto a floured surface and fold the dough in thirds, bringing the opposite sides together at the center.  Turn 90 degrees and repeat the folding for the other two sides.

Place dough seam side down onto some wheat bran, then invert (seam side up) into the pre-heated pot (diameter of pot should be at least as wide as the diameter of your dough).  Cover immediately with hot lid and back 30 minutes, covered.  Remove lid and bake an additional 10-20 minutes until bread is golden brown under the wheat bran.

Remove from oven and let cool slightly before slicing and enjoying.
erica at 12:15 PM
Share